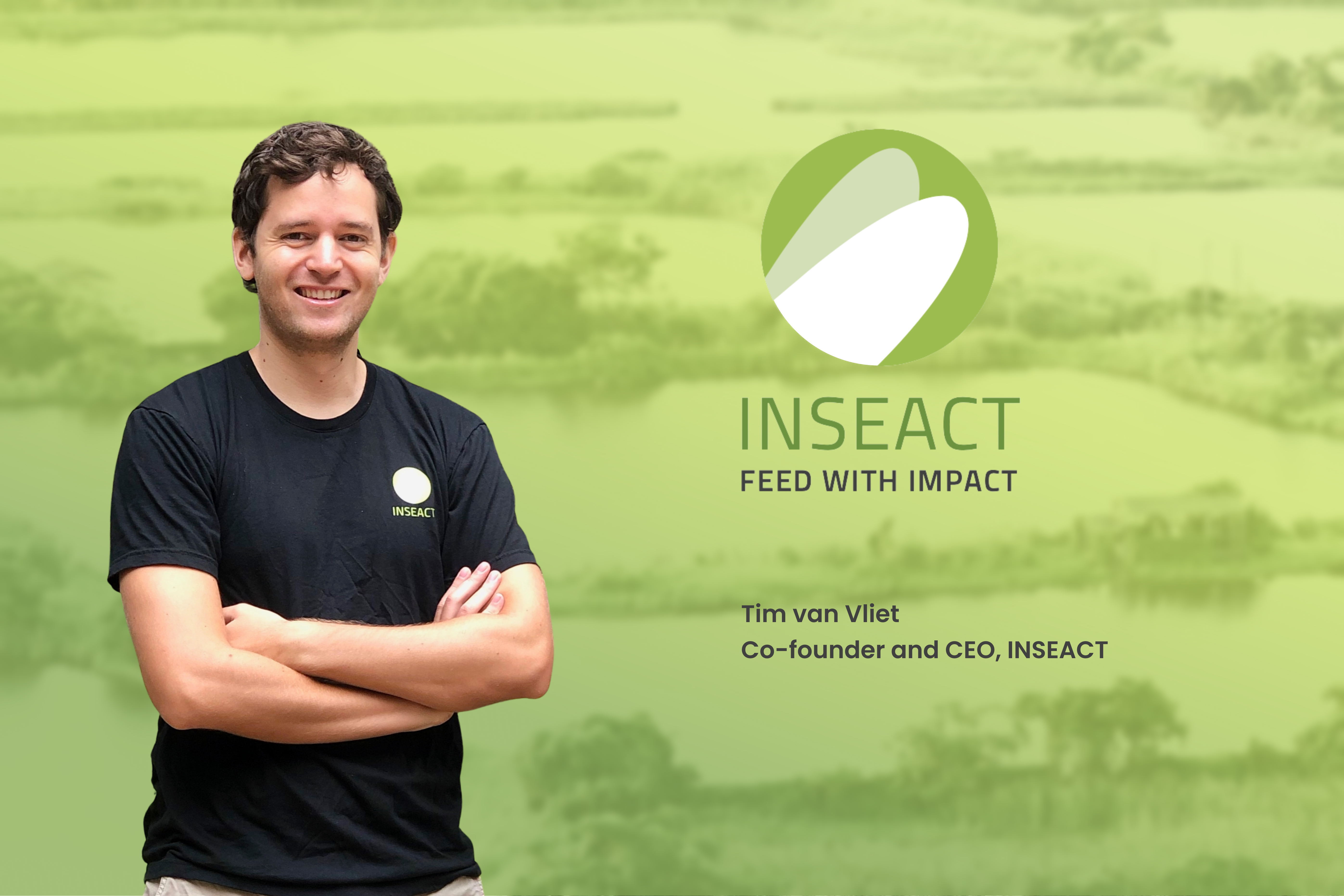 We spoke to the founder of another exceptional business that participated in the INSEAD Venture Competition (IVC) during their time at INSEAD: Tim Van Vliet, co-founder and CEO at INSEACT, winner of the 37th IVC.

What is it that INSEACT aims to do and what led you to this idea?

INSEACT takes waste products from the palm oil industry and feed it to insects, which are processed into protein products. The protein product is used as an ingredient in fish and shrimp feed.

I landed on this idea while on a trip a couple of years ago. I'm Dutch, but my grandmother and father are from Samoa, a small island in the Pacific. While visiting some of my relatives there, I realised a lot of them couldn't make a living catching fish, due to overfishing. Overfishing in the Pacific is a huge issue. The majority of the fish that's caught in the Pacific are not used for human consumption, but as feed for other fish. It's ground up into fish meal and fed to fish and shrimp. At INSEACT, rather than feeding fish to fish, we are feeding insects to fish, which is much more sustainable.

How did you experience taking part in the IVC and what did you learn from it?

We were just students at the time and won the IVC at the beginning of our MBA program. I was extremely busy juggling, academics, entrepreneurship and the IVC plus social activities.

I came into the MBA on a mission. I had this idea and wanted to make the most of the program and the opportunities I had. I wanted to develop my idea into a project and from a project into a business. I was proactive in finding friends and students to work with me on INSEACT. We ended up winning the Startup Bootcamp, getting some traction for our idea there. In the months after, we worked on getting our idea ready for the IVC, submitting our venture plan and learning more about the industry. Reaching the semi-finals served as more proof that we were on the right track.

We doubled down on our work and developed a fully-fledged business plan. At that point, we tried to involve a lot of third parties, external advisors and mentors, to help us with our project, and through that, we improved our business plan, our project and company outline. After a few months in the MBA, we took part in the IVC final and won. We got great support from it, both financial, as well as support from MOHARA. The IVC served as a launchpad for our business – it was the beginning of INSEACT.

What were the biggest changes you experienced after winning the 37th IVC?

The IVC provided us with a protected environment. However, selling your idea in the real world is a bit tougher. We initially had to adapt a little to that transition.

During my time at INSEAD, we won all the internal prizes – the Startup Bootcamp, the IVC and also the Sustainability Award. Afterwards, in terms of talking to customers, it's not just enough to just sell a dream, you also need to deliver. We did manage to raise a nice seed round funding. With the transition from the IVC to the real world, we spent a lot of time determining the feasibility of our idea.

Winning the IVC provided us with support from MOHARA. As a company, you need to have a business card to show the outside world. That's why we worked with them on our website. MOHARA was generous with their time and resources, not just with setting up our website, but also with maintenance and updates later on. We managed to set up a professional-looking website and through that, we got our business card. In the beginning stages, it helped to gather confidence and build trust when we approached people.

What are some of your greatest achievements?

There were a couple of great moments, for example raising our seed money, which has been an important milestone for the company. Another one would be setting up our pilot site in Singapore, which is currently under construction.

One of the greatest achievements was seeing our team grow and enjoy what they're doing. A couple of years ago at the IVC, I envisioned a company where everybody was as passionate as I am about the environment, startups, and insects. Now, I see that team around me. Everyone is extremely excited about the environmental impact that we’re having, about startup life, and our growth.

What does INSEACT have planned for the coming years?

Next year, we'll be raising our series A funding. We're also planning to expand into new markets in Southeast Asia, setting up large commercial site facilities. After that, we will continue to set up sites in Malaysia and Indonesia over the next few years. Our future is about scaling up quickly and continuously growing.

In the world of protein sources, if you look at other companies producing alternative proteins or even insects, they’re still harmful to the environment.

Alternative proteins such as cell-based or plant-based are better, but still harms the environment because it requires processing, which includes laboratories and factories, so there is still a negative impact on the environment. However, at INSEACT, we are producing a protein source that is good for the environment. It's completely carbon negative. The more you use our product, the more carbon is taken out of the environment. Our product is carbon negative because we are giving our insects feedstock. Feedstock emits a lot of greenhouse gases and is one of the biggest greenhouse gas sources in Southeast Asia. Our insects and their protein reproduction is carbon negative, which is one of the first carbon-negative proteins in the world. While other products might be less bad than their alternatives, our product has a positive impact.

We're trying to see how we can incorporate this protein source into the human food chain. It's also our long term mission to use these proteins for human consumption once people are more accustomed to the idea.